How to Be an Effective Meeting Organiser

Any knowledge worker would know that meetings are one of the most critical team activities in the modern workplace.And if you have worked long enough, you might have even got an opportunity to conduct one of your own. 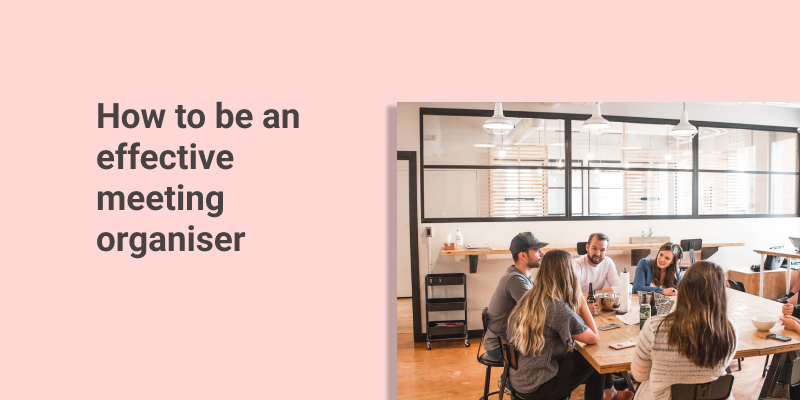 Any knowledge worker would know that meetings are one of the most critical team activities in the modern workplace.

And if you have worked long enough, you might have even got an opportunity to conduct one of your own.

So how did you go about it? Let us know what you learned on Twitter @RoutineHQ

So, in this blog post, we will look at how to be an effective meeting organizer.

Who is a good meeting organizer?

The roles you take on in an organization rely on you either possessing or developing a few key characteristics or qualities.

And taking on the role of a meeting organizer is no different.

The ideal meeting organizer has the following qualities:

Start and end on time or ahead of it

The one thing that nobody who attends a meeting would appreciate is starting late or extending the meeting when it is not warranted. As the organizer, it is your responsibility to adhere to the clock.

The exception would be when the meeting comes to an organic conclusion ahead of time, in which case you should strongly consider ending it and letting everyone go.

Consider going through past meetings and their action items before starting/preparing the agenda for the new meeting.

Meetings are effective only when things agreed upon or discussed are followed. A meeting that does not outline future steps is just an intellectual exercise with no measurable outcome.

So when a meeting is complete or during concluding remarks, create a follow-up plan and share it with the attendees and other stakeholders.

You'll have to learn early in your meeting organization journey that you can only do some things and must delegate roles and tasks to attendees.

So pick someone to do the meeting minutes, another to keep the time, a different person to keep the conversation on track, etc. Think of yourself as the orchestrator, not the one running from one instrument to the other, trying to play all of them.

A good meeting is one where participants know what they are getting into and are prepared to have a productive conversation.

And a good meeting agenda can solve most of those problems by providing the attendees with all the necessary context through documents, attendee list, list of topics, etc.

Keep the conversation on track

As mentioned earlier, meetings often go on an unrelated tangent when someone needs to enforce a structure/plan.

And as the organizer, it is up to you to either bring the meeting back to its core topic when there is a digression or delegate this task to someone on the attendee list.

Encourage everyone to contribute.

An optimal meeting is when everyone invited has positively contributed to the discussion. As the one organizing it, you must ensure that everyone contributes.

So look for those being silenced or having difficulty articulating their ideas and encourage them to come out and say it. Make the meeting room a safe space for ideas and conversations and remove any stigma around failure to make a good point.

Invite only those who need to be there

Not everyone in your organization needs to attend every meeting. You make the process effective when you carefully select participants based on relevancy and their ability to contribute to the meeting.

If someone can be intimated through asynchronous means, then strongly reconsider inviting them to the meeting.

Plus, when someone is handpicked for their relevance and ability, they are likely to be more motivated to contribute to the conversation.

And with that, we come to the end of this post about becoming an effective meeting organizer. Thanks for reading.

Thank you! You'll get your invite soon.
Want to know how Routine works?
Watch this short tutorial on